im here to make friends and post espurrs, and. i have both. so. 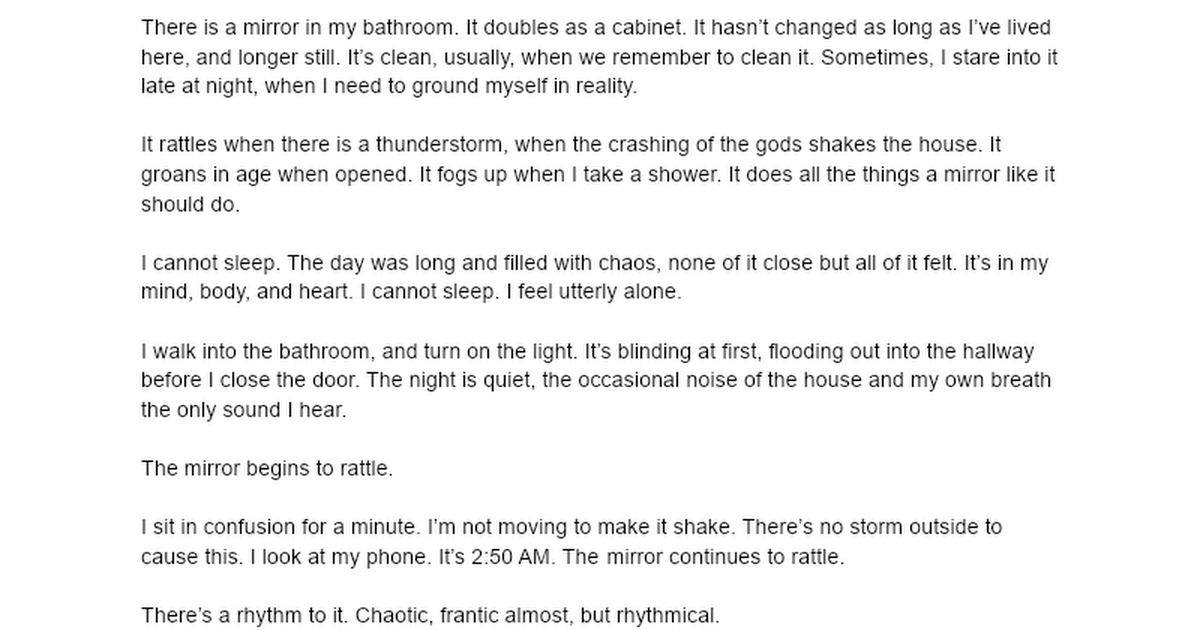 There is a mirror in my bathroom. It doubles as a cabinet. It hasn’t changed as long as I’ve lived here, and longer still. It’s clean, usually, when we remember to clean it. Sometimes, I stare into it late at night, when I need to ground myself in reality. It rattles when there is a thunderstorm...

hey everyone, sorry im not terribly active here, but i wrote a thing

Two binary-style headers I did for my toyhouse to seperate my fantrolls from normal OCs.

a friendly reminder i have some sideblogs too! i dont post on them much, BUT they exist

themotherwarlock - my destiny sideblog! this is where all things destiny, be it official or my own content goes
dissonant-whispers - my D&D sideblog! this one is even dustier but now that im picking D&D back up i feel like i can use it more

#beep boop i promo myself like the narcissist i am

do i eat another cup of jelly beans to further burn my mouth while watching critical role at 4:30 AM (yes) or just go the fuck to sleep (no)

i am aware sometimes yes

#i look back at my old selfies. i smile #sets a goal to look like how i used to because quarantine got me fucked up #but thamk you uvu #words are hard right now because my brain hard core shut off #unrelated entirely my fucking spacebar is squeaking whenever i use it and it is driving me fucking insane

anyway its been a hot second since i posted my face. so have my face., because its good sometimes.

trying to be more active here despite my previous post

#youd think as a staff member. i would be more alive #the jokes on you! i dont know how to do things #existing? never heard of her

i want nothing more than to cut all ties with people, scrap every creative work ive ever done and just disappear

#feeling useless feeling isolated feeling worthless and aimless #i cant do one simple thing and suddenly i shut the fuck down #why do people bother honestly. #dnr

#maddie be like cant help but feel useless to the team!!! because videos dont fucking explain how to do shit #gonna fucking try again TOMORROW i GUESS #because NOW i feel like im going to peel my face off in sheer anger because ADHD prevents me from completing simple fucking tasks #one thing goes wrong and i just break the fuck down i guess!!! haha!!!!!

hi yes id like to get in contact with the person who made emotions, im feeling too many of them at once and would very much like to stop it

#me: no stop youre already a mental and emotional wreck you cant feel more things #also me: haha emotion machine go brrrrrr

It's not even an unpopular meme from the old days!!!

I love the thought of women

#Artspurr #artists on waterfall #my design

I have more but I'm just gonna post them in pairs.

one of these days i would just like to go.... maybe a month without feeling sick in some way....

for reference this is the kind of stuff i do. people have told me theyd commission me but i have no idea.

#Art #artists on waterfall #is that the tag? i have no idea despite literally working here #i dont post art often

Late to the party, but I really love the k/da girls♥

#LoL #ive only ever really played akali tbh #this looks so good tho :O

this is a test

#to see if badges work

Hey folks! We're making some excellent progress on build 0.99. We've broken with our usual version numbering on this one because we believe that it's stable enough and has all the core features needed for the site to be usable, and so is the last version before the site moves out of beta. There'll be more on that in a future post, since this one has a different purpose.

Moving out of beta starts bringing new challenges with it, and to meet those, we need funding. We can't run Kickstarters ad infinitum because that's stupid, and relying on blog slots, subscriptions, and commission market income is far too volatile (and, likely, to be too low) for us to be comfortable with, especially when rapid expansion is in the cards. To that end, after some initial community feedback on the staff's personal blogs and via the Discord, we're currently considering the possibility of ads. This post is intended to outline our plans on how they'll be on the site, and get feedback from you guys before we make final decisions on whether to go ahead with it.

As a quick note - those of you using Privacy Badger or uBlock will likely notice a couple extra trackers showing up now - we're pre-emptively applying to Google AdSense. While there's no ads on the site yet, they do require we put the code on the site ahead of time so they can verify we're the real owners.

The current plan is that there'll be one ad per page, though this may be tweaked - there'll likely be a little A/B testing involved while we figure it out. This is restricted to the core site, and only a few pages. Ads will not be placed on blogs by us.

On desktop, the ad will be a 250x250px square ad showing in the sidebar, underneath the featured post. On mobile, it'll be a larger, rectangular ad inserted into the dashboard - tacky, and we hate it, but there's not really a way other than that to do it on mobile. When the app is ready, there'll be an ad no more than every 25 posts. There might be a small thing advertising subscriptions slid in occasionally if you use an AdBlocker, but on the whole, we won't pull the "you're TRASH for blocking our ads, you absolute SCUM" stuff that a lot of sites do.

Edit to add: You can be damned sure that we won't be allowing autoplaying audio/video ads and that if any get through, we'll be immediately blocking that advertiser.

In the future, the aim is to move away from AdSense and roll our own advertising. This gives the benefit of less awful trackers as well as letting us very thoroughly vet everything that shows. Adoption on that will likely be slow, when it's ready, and it'll be the same ad network that powers Glacier's ads. Where ads are eligible to use our own network, it will always favour that instead - this means our own users can put ads up to show, eventually.

Given that subscriptions will be a thing too, subscribing at any tier will immediately remove ads completely for you.

With the site growing, we're very quickly coming to the point where our capacity exceeds the money we have available. In addition, as the coming update marks the start of serious app development, more of the team are preparing to spend significant amounts of time working on Waterfall. Obviously, that means that we need to start making a little money to pay the staff for their time, as is fair. Unfortunately, pre-launch predictions for the CM's usage levels didn't pan out, which means we have to be significantly more cautious with what we think subscriptions will bring in as well and have a Plan B, so to speak, especially since we've never charged for access.

Community feedback on personal blogs has been largely positive towards us running ads, with the general consensus that so far, we've made good on our word, and that we're mostly trustworthy enough to keep to it when we say we won't go off the rails plastering ads everywhere. At this point, we're not interested in profitability - while having money in the bank for a rainy day would be useful, the current aim is purely sustainability, plus a little bit for expansion.

To this end, we're making this post - no plans are finalised yet, but we wanted to let you know that this is something we're considering doing so the site can stay healthy and the staff can stay fed. Feedback from everyone is welcome and encouraged - we know very much that our marketing through til December said we have no ads, and starting to include them is a fairly large change even if it does result in a net positive for the site (more money = more staff working more of the time). So please - reblog or comment to give your opinion and any concerns! We likely won't reply to all of them (if we do, it'll be on a staff personal blog since we're trying to clean this one up a little bit to make sure info is easier to find), but we will read and take everything into account before making a final decision.